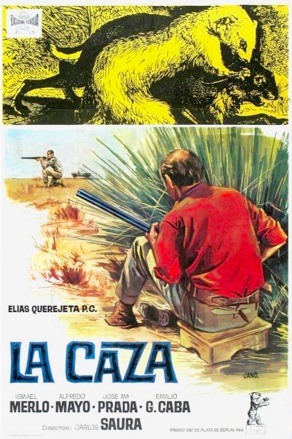 Shot in crisp black and white (cinematography by Luis Cuadrado) and sharply edited by Pablo G del Amo (in the documentary about the latter, written about on here last year, the editor tells Saura that this is the only film that he revisits on a yearly basis), La caza marks Carlos Saura's first collaboration with producer Elías Querejeta (who had a preferred team of technical crew) and a stylistic leap on from Llanto por un bandido. The film is considered a landmark in Spanish cinema - 'together with Nueve cartas a Berta (Nine Letters to Berta, Basilio Martín Patino, 1966), [...] La caza is the most representative film of the mid-1960s cycle that came to be known as Nuevo cine español [New Spanish Cinema]' (Mira 2010: 71) - and won Saura the Silver Bear at the Berlin Film Festival in 1966 - his first international award.
The film takes place in a location that had been a battlefield during the Civil War (D'Lugo 1991: 57), and 'the war' (the censors ensured that the Civil War is not explicitly mentioned) permeates the narrative and the relations between the men (the older three served together). The landscape, and the way it is presented onscreen, is a metonym for the psyches of those who survived the war: battle-scarred, with secrets and remnants of violence hidden in darker recesses. Alberto Mira notes that the use of metaphor and strong imagery 'went beyond narrative needs: the heat that drives characters to madness could be read in terms of the stifling atmosphere created in the country after the Civil War, and the butchery was easily read as a reference to the conflict itself [...]' (2010: 71). Hunting was strongly associated with the regime and there is also an intertextual reference being made with the casting of Alfredo Mayo:

'As a young man, Mayo built his career upon a series of forties films playing the role of the stalwart Nationalist hero fighting the Republican scourge. By far, the most influential of these was the role of José Churruca in Sáenz de Heredia's Raza. Not only did Mayo play the part of the nationalist patriot; his role was fashioned as a sanitized version of the Caudillo, replete with narrative parallels to Franco's own biography. Nowhere in The Hunt is there any overt reference to Mayo's former screen persona, yet implicitly, the character of Paco seems to represent a sequel to the earlier Alfredo Mayo, film-actor-as-national-hero. It is a shattering statement of the passage of time and the transformation of a bygone mythic hero into a venal and narcissistic old man.' (D'Lugo 1991: 57)

As an outsider to this clique, and crucially of a younger generation, Enrique is at one remove from the associations generated by the older men. He therefore acts as witness, and audience proxy, when bitter resentments and disappointments finally cause psychic breakdown and the men turn on each other with spectacular violence. The film ends with a freeze frame of his face, his panting still audible on the soundtrack, as he runs from the scene in horror.
For the most part the film is realist in its depictions but the frequent extreme close-ups of sweating faces, of weapons and ammunition, and of rabbits in their death throes, give a slightly surreal edge to proceedings - almost a 'heightened' reality, or as if the camera is also feeling the effects of that relentless heat. It feels like a very modern film, not just visually but also in our access to the interiority of the characters:

'[...] Saura uses an experimental procedure which overlaps and contrasts with the realism: the interior monologues of the characters. They reveal their doubts, complex thoughts and passions that move them - the combination of their old friendship, resentment, envy - and it fills the silences, ellipses and insinuations of his dialogues until the final slaughter. Saura incorporates into cinematic introspection mechanisms that were being explored in contemporary literature (Luis Martín-Santos, Juan Goytisolo, Juan Marsé, Juan Benet, etc.).' (Sánchez-Biosca 2011: 117)

State of mind, or at least the animosity under the surface, is also signalled early on via the editing in the sequence where the men are preparing their weapons: a series of shot-reverse-shots show Paco in extreme close-up checking his sites facing right, then cuts to an extreme close-up of José doing the same but facing left (making it appear that they could be aiming at each other), the sequence of shots then repeats before a mid-distance shot establishes their actual positions in relation to each other (sitting alongside one another facing in opposite directions). 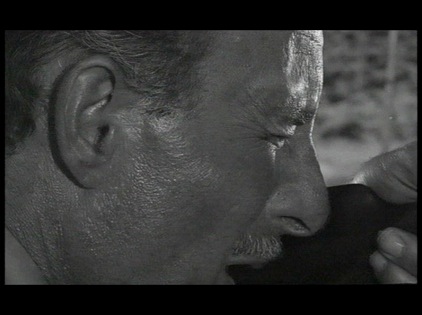 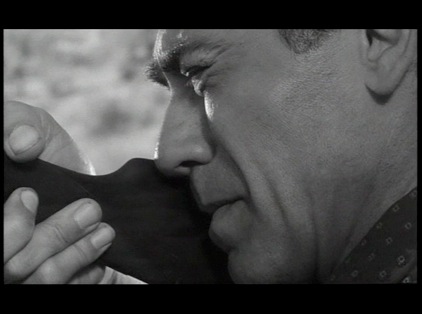 Hopefully I will return to this film later in the year as I've barely scratched the surface in this short piece and many different angles could be taken -it is an incredibly rich text and a small mountain of material has been written on it (I've only read a fraction of it so far -I've found a book, La caza...42 años después [La caza...42 years later], which is a collection of articles about the film and looks really interesting but as it's in Spanish it'll take me a while to read). My intention with the future longer pieces is to draw groups of the films together, but obviously I can't start to think about that until I've watched more of them.