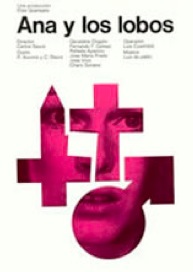 Warning: contains spoilers, including the ending.

From the first appearance of the men in the film -José (Prada) entering the newly-arrived Ana's bedroom and insisting on seeing her passport and inspecting the contents of her suitcase- there is the unsettling sense that the foreigner has wandered into something beyond her ken (her passport may show her to be much-travelled but she is still naive). Soon enough she has José showing off his collection of military uniforms to her and commanding dominance of the household, Fernando (Fernán Gómez) explaining his pursuit of a union with God (or at least levitation) in the whitewashed cave at the bottom of the garden, and Juan (Vivó), the children's father, making amorous advances and sending her erotic letters with international postmarks (by using stamps from the family's stamp collection). The men essentially represent three taboos of Spanish culture at the time - the military, religion, sex - but in a slightly more neutered form than they might have taken (José isn't in the military, he just collects uniforms, and Fernando isn't a priest). They're almost living out a kind of stunted adolescence - or rather, in still living with their mother, they have managed to avoid maturing into adults; there's something quite childlike about their enthusiasm for their respective 'interests'.
But the doll is really the first clue that what is going on is not just harmless fantasy. The three children (Puerta, Lage, Gil) dig up a doll that has had its hair cut off before being wrapped in a shroud, tied with string and buried in the garden. Ana intuits that there is something disturbing at play (the children say that 'the wolves' have done it) and insists that Juan tells her who has 'tortured' the doll but seemingly takes no further action (or precaution) on being told that it was Fernando. It's interesting that Higginbotham refers to the film as a 'grim parable' (1988: 86) because there's something fairytale-like about it and it also carries with it the sensation that certain sequences could be being dreamt by one of the characters - the parallels between Fernando's 'vision' of the various members of the household early in the film and the set of events leading up to Ana's eviction from the house and the brutal finale (several characters including, most pertinently, Ana, are wearing the same clothes in both sequences) suggests that not everything we see actually happens. Saura has said that he saw the final sequence as imaginary ([1979] 2003: 53) (Ana is expelled from the house when Mama (Aparicio) realises how much discord she has sowed, and as she leaves the grounds she is pounced upon by the three brothers - Juan rapes her, Fernando cuts off her hair, and José handcuffs her before shooting her in the head - the film ends on a close-up of her agonised face), which explains how the family (and Ana) can be revisited in Mamá cumple 100 años / Mama Turns 100 (1979).
Overall the film made me feel uneasy, mainly because of the extent to which Ana plays games with the brothers, teases them, and plays the coquette, seemingly unaware that she is seriously out of her depth - there is a creeping sense, heightened after the doll is found, that something terrible will occur (which it does -whether imaginary or not). 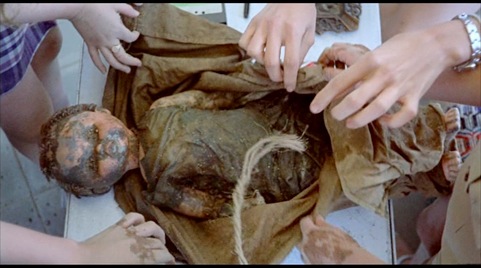