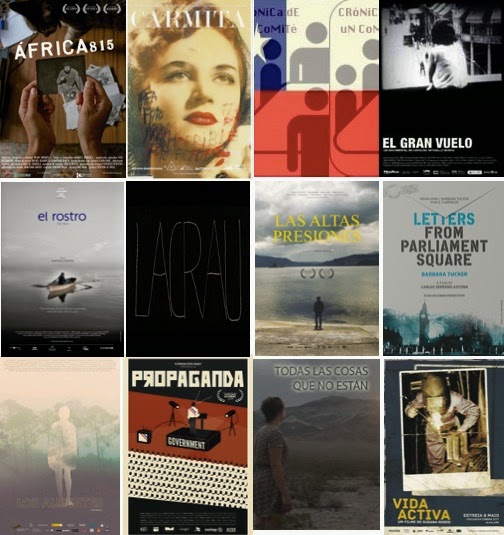 Until the last day of 2014, the online platform Márgenes is making the twelve films that played in competition at its 4th Festival (and one that played outside of the official line-up) available to view for free. The online side of the festival started on the 13th December, but I didn't get a chance to take a look until I finished work for Christmas - I've only managed to watch a handful of the films so far, but I thought I should point it out on here before it ends.
The festival started as an exclusively online event but now organises screenings in Madrid, Córdoba, Barcelona, Montevideo, México DF, Monterrey and Bogotá, before putting the films online. The point of the festival is to highlight those films that have not had a commercial release or that otherwise fall outside of the normal distribution circuit. To be eligible, they need to be more than 40 minutes in duration and originate from Spain, Latin America, or Portugal (the countries included are: Argentina, Bolivia, Brazil, Chile, Colombia, Costa Rica, Cuba, Dominican Republic, Ecuador, El Salvador, Guatemala, Honduras, México, Nicaragua, Panamá, Paraguay, Perú, Portugal, Puerto Rico, Spain, Uruguay and Venezuela) - you can see the full list of criteria here. Many of the films in the 2014 edition have played at other festivals and won multiple prizes - but the list of winners for the IV Festival Márgenes have also now been announced.
The official selection of films streaming for free encompass documentary and narrative fiction (links take you to the film - I've indicated which ones have English subtitles):

I've watched four so far - El gran vuelo, All the Things That Are Not There, Las altas presiones (which won the Nuevas olas / New Waves section at the Seville European Film Festival last month), and África 815 - but will hopefully manage to watch a couple more before they disappear (having watched Pablo Larraín's No last year, I'd like to see Propaganda, which is about the 2013 Chilean elections). A common thread across the ones I've seen is 'absence' or the past being retraced through fragments - although in Las altas presiones this is manifested in how the protagonist's (Andrés Gertrúdix) return home heightens his sense of having lost who he really is - and judging by the synopses of the other films that theme unites many of them. Both El gran vuelo and África 815 (my favourite of the four) use a combination of photographs with diaries / memoirs and letters to explore (real) lives hidden from view on the surface.

El gran vuelo is the story of Clara Pueyo Jornet, and examines her clandestine existence from the Civil War years up to the point when - sentenced to death (she was an active militant for the Communist Party) - she escaped from Les Corts prison in Barcelona in the early 1940s by walking out of the front door (the great flight of the title) and was never seen again. Jornet was constrained by the times she lived in. There was no accepted space for political women in that era - the danger of Jornet's situation is indicated in her coded private correspondence with friends, and she seems to have lived in perpetual flight for years - and even once underground she rejected the rigidity the Communist Party; she had been due to leave the safehouse where she lived with three other women (to set out on her own), the day after the house was raided by the police (the film suggests that this timing may not have been entirely coincidental). She was the only one of the four sentenced to death, her letters proving incendiary in the eyes of the authorities. Through Jornet's own words (copies of her letters are seen on screen and read as a voiceover) and a series of photographs (including several group shots taken inside the prison), Carolina Astudillo manages to fleetingly reconstruct a woman who was forced into absence, and seemingly long forgotten.

Flight also occurs in África 815 - Pilar Monsell's father, Manuel, made a bid for freedom via enlistment in 1964, leaving Madrid and heading to the exotic Saharan Spanish colony to carry out his military service. Reading aloud from her father's diaries (which he has since reconfigured as a three-volume memoir) and looking at his photo archive, Monsell compassionately explores her father's hidden life. Black and white stills change to moving colour images in conjunction with the collapse of Manuel's attempts at self denial - he got married in order to have a family - and his return to Morocco in the 1980s in a hopeful (but ultimately unsuccessful) quest to find his true Prince Charming. His sadness and loneliness (as recorded in his diary) as he realises that one man after another merely sees him as an escape route to Europe is palpable even all these years later and when read at one remove by his daughter. Perhaps someone less close to the subject would have asked more probing questions (this is straightforwardly her father's story - her mother is briefly seen in holiday film footage but not mentioned), but this melancholy film was made with love and acceptance - and it also feels like the director was genuinely interested in finding out more about her father. [The film's official website]

The sadly-defunct Blogs&Docs has been resurrected for a special issue on the films included in the festival (and their archive is well worth exploring too).
Posted by Rebecca at 14:24