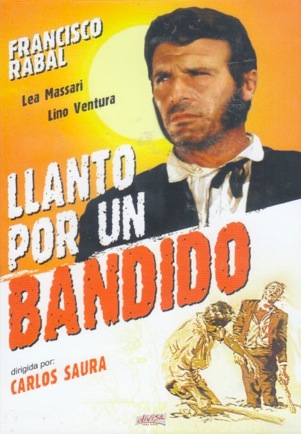 So begins the 'Carlos Saura Challenge'. This is not his first feature-length film, but Los golfos / The Delinquents (1962) is unavailable in any format, so this is where I start. The reception of Los golfos (the script had been banned by the censors four times) had demonstrated that depicting the here-and-now in Spain was a sensitive issue, and Jean-Claude Seguin suggests that with Llanto por un bandido Saura was attempting to escape from Spanish reality:


"It was for the director to reinstate the figure of the bandit José María 'El Tempranillo' who, when in contact with a fugitive liberal, Pedro Sanchez, acquires a certain political consciousness and chooses the Constitutionalists. Behind this historical film comes a discourse on the need for ideological commitment which, in Spain, was a courageous stand." (2011: 54)

However he clearly had not travelled far enough from reality as the film was heavily cut by the censors, in particular the opening sequence where Saura pointedly uses playwright Antonio Buero Vallejo (who used symbolism in his own work to criticise the Franco government) as a town-crier, announcing a verdict/judgement to the town square while Luis Buñuel cameos as an executioner preparing to execute the condemned men by garrotting - the sequence has been cut so heavily that I thought that the DVD was skipping. It was this treatment of his work that led Saura to utilise metaphors and parables in the films that followed. (side note: here is an interesting interview with Saura about the influence of Buñuel)
Overall, aside from the impetus to be more oblique in presenting a view that might be considered politically 'problematic' by the regime, the elements that seem to me to be significant in terms of Saura's later work are: the allusion to Goya and his Duelo a garrotazos / Fight with Cudgels in the fight sequence between Rabal and Lino Ventura (below) where, buried up to their knees, they batter each other with branches; and also what is already quite a distinctive use of music (certain sequences appear to either be cut to the music, or the actions within the sequence -for example, the blows Rabal rains down on Ventura- are timed to fit the rhythm of the music, which is often diagetic, i.e. we see it being performed onscreen). 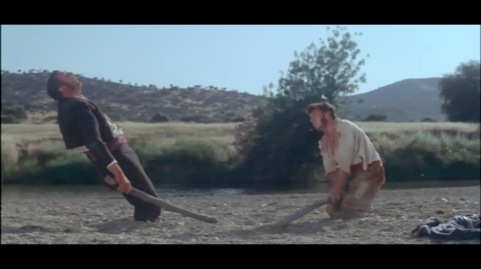